Posted by Paul Barter on August 24, 2010
Small motorcycles and scooters can be amazingly space efficient to park. Up to 10 small motorcycles can be parked in one car parking space.

I wrote about this in May 2010 on Reinventing Urban Transport in a post titled: Motorcycles squeeze into urban nooks and crannies 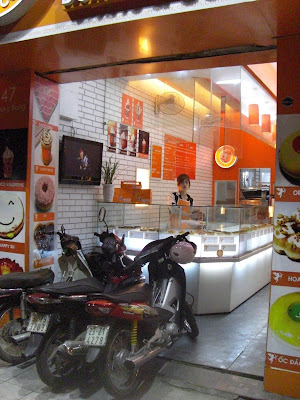 Parking on the door-step (literally) in Hanoi
The space efficiency of motorcycles is important for many Asian cities.

Traffic engineers usually assume that motorcycles consume about half the road space of a car. In other words, two-wheelers' PCU value is typically given as 0.5 'passenger car units' in heavy traffic.

But motorcycle parking can usually squeeze in many more than two machines per car space.

For the Asian cities parking study (carried out in late 2009 and early 2010 but not yet published), we found motorcycle parking space norms of up to 10 two-wheelers per car space.

The other extreme is one motorcycle per car parking space. Vancouver bikers did this recently when they protested the lack of designated parking for their machines by taking entire parking spaces, and paying for them. [Update: here is a more in-depth account of the Vancouver protest.]

By the way, the space taken by moving motorcycles also depends on the situation. A recent UK study "suggested that the slower the traffic, the lower the PCU value for motorcycles. In fast traffic they are hardly more space-efficient than cars. The study found "the PCUs of motorcycles in congested flow to be 0.40, 0.55 and 0.75 when the speeds of passenger cars are ranging from 10 to 20, 20 to 30, and 30 to 40 km/hr respectively." Presumably lower PCU values at low speeds reflects the ability of two-wheelers to lane-split and make their way through stalled queues of larger vehicles - a common sight in Southeast Asian cities.