An overpricing trap in simple versions of performance pricing for parking?

In my last post I asked if imperfect versions of performance pricing are better than none at all.  My answer: generally yes. Taking small steps towards demand responsive pricing for on-street parking is usually a good idea (for reasons to be explained in future posts).

But I can see at least one mistake to avoid: over-pricing.

In imperfect approximations of demand-responsive parking pricing, it would be easy to over-price parking. This would create too many vacancies and make the whole idea vulnerable to objections that it is killing local businesses.

High-quality performance pricing has an answer to that:  if motorists really stop coming, then the prices will drop again until the problem is solved and, in any case, the prices will not rise past the point that gives 15% vacancies.

But rough-and-ready versions of demand-responsive pricing might indeed need to be careful not to over-price at certain places and certain times. This mistake could be tempting for at least two reasons. Today I will talk about one of them.

Simple versions of performance pricing can only vary their prices on a coarse scale.

For example, you might have just three prices (zero, basic and peak) with two pricing zones and two time periods in which to apply these prices.

Now, if you aim for vacancies at the really busy places and times within a large zone and over a long pricing-period, you would end up accidentally overpricing parking for part of the zone and for some of the time. Oops. 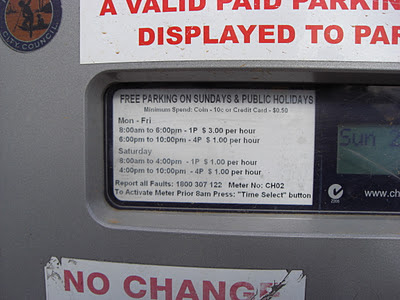 We don't yet have many examples to analyze but I think the danger is real.

After all, overpricing can happen even when on-street pricing is NOT demand responsive. For example, Donald Shoup was critical of the City of Los Angeles last year.


Two years ago the city doubled meter rates everywhere, and I’ve since seen entire blocks where there isn’t a single car parked at a meter. The prices should come down on these blocks...
...
Meter rates were based on revenue when the city doubled meter rates everywhere, with a minimum $1 an hour, two years ago.  Since most meters had been 25¢ an hour, that meant quadrupling the price at most meters.  Rates at most of the city’s meters had not changed at all in the previous 18 years. Inertia had been the city’s policy, not maximum revenue or good management.

The SFPark trial in San Fransciso is also revealing that the previous flat parking prices must have involved overpricing many streets at many times. How do we know? Because many of the price adjustments under SFPark have been price REDUCTIONS due to very low occupancy rates.

These arguments also suggest that performance pricing should be introduced step-by-step and cautiously. And, in fact, even though SFPark is 'gold standard' performance pricing, it is being introduced in small steps, with only small price changes allowed, and only once per month. The discussion above suggests that such caution could be even more important if your pricing is not 'gold standard' and will not be varying much in time or space.

Do you have any examples of cities falling into the trap of over-pricing when adopting simple performance pricing? Or maybe I am wrong to worry about this?