Where in Europe limits car parking and boosts bike parking?

Posted by Paul Barter on April 29, 2019
The European Cyclists' Federation (ECF) sees minimum parking requirements as a good thing. But only for bicycles. For cars, it wants minimums replaced with maximums. 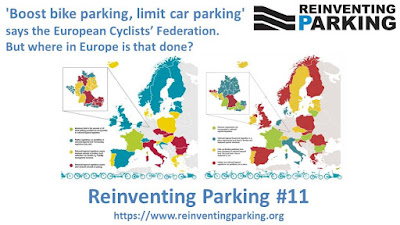 The ECF set out last year to find out where the countries of Europe stand on this issue (and looked at a number of sub-national regions as well).  The result is the recently-released report: "Making Buildings Fit for Sustainable Mobility: Comparing Regulations for Off-Street Bicycle and Car Parking in Europe".

To find out more I interviewed Fabian Küster, who was the lead author of the report.

Scroll to the end for more about Fabian and the European Cyclists' Federation. 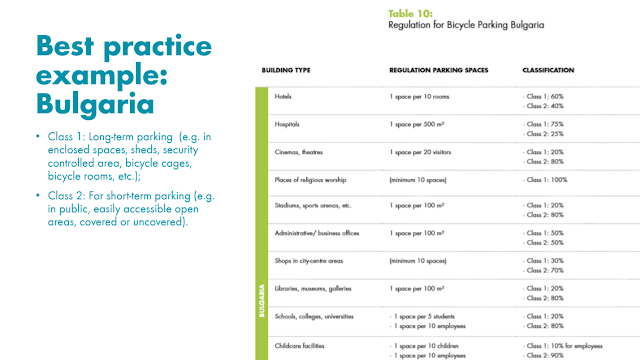 [4:27] Hungary imposes minimum parking requirements at the national level. Some of them are shockingly high and there is only very limited flexibility in how they are applied.

[6:56] Fabian explained more about the ECF. It has existed since 1983 and now has about 18 members in 40 countries. The ECF organizes the Velo-City conferences (now often outside Europe too). It has also been instrumental in setting up the World Cycling Alliance.

[8:10] I asked why ECF is interested in parking right now? Besides its importance as an influence on travel behaviour, the specific trigger for this study, oddly enough, was a review of an EU policy on energy efficiency of buildings. The initial ECF concern was that e-bicycles were being left out of the discussion but they quickly realized they needed to look at the whole picture of parking with buildings.

[15:51] I asked about the focus of the report mainly at the national level, as well as the sub national region level. This contrasts with most parking policy discussions (including on Reinventing Parking), which focus at local government level. This focus offered some interesting perspectives. The reason was practical. ECF was focused on the review of European legislation that would be translated by member states at national level. But a national level focus is also justified by the global and national importance of the impacts of local parking policies.

[17:54] We reflected on the huge diversity of urban transport situations across Europe. It is far from being a sustainable transport paradise throughout. For example, Fabian mentioned Italy, where Naples is awful for cycling but cities like Parma have a wonderful cycling environment and high levels of bicycle use.

[19:15] ECF sees the role of national governments on this parking issue as setting the framework while allowing local government to decide the specifics, such as the specific number of  bicycle parking space to be required, depending on the situation. The report praised France for doing well on both car parking and bicycle parking. That model suggests that national standard should define what is good enough but allow local governments to do better than that. Of course, this is a hot issue, with much debate over which levels of government should weigh in on parking standards. California in the USA for example has seen debate over to what extent the State level should restrict the parking policy options of local governments. 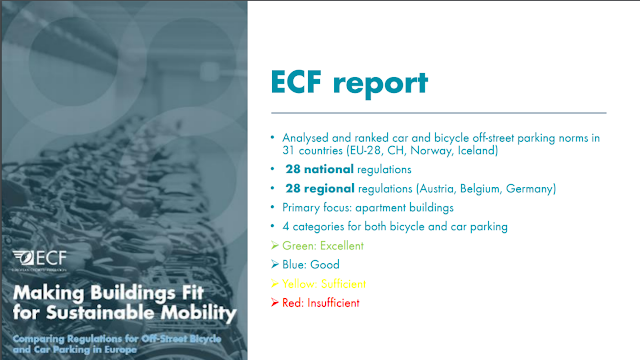 This led to some slight oddities, which require a more careful reading than just glancing at the coloured maps. For example, the Netherlands, is in the second best category on bicycle parking because they don't have a national minimum. But local authorities generally handle this issue very well, with the aid of non-mandatory national guidance.

[22:27] The main focus of the report is parking with apartment buildings but it also provides some useful information on parking rules for other buildings too.

International comparisons of parking regulations are difficult! Well done to Fabian and the ECF for this effort.

There is much more detail in the report itself. Do check it out.

Fabian Küster is Senior Policy Officer with the European Cyclists’ Federation, which he joined in 2007.

He took the lead on the ECF's campaign for an EU Cycling Strategy.  Fabian works on a range of policy areas, including funding, environmental and climate policies as well as urban mobility, with the latest focus being parking.

Fabian is from Germany but has lived in Brussels since 2002. He has previously worked for the European Environmental Bureau, for a Member of European Parliament and for the German Embassy, among others.

[His private mission is to turn his three boys into daily cyclists.]