Daniel Firth surprised me several times in the latest episode of Reinventing Parking as we discussed Stockholm and its parking policies.

I learned in December about Stockholm's pricey residential on-street parking. Sharing about that on social media connected me with Daniel, who turned out to be ideally placed to explain more.

I was keen to talk about that pricey residential parking. But I didn't realize until our discussion just how much other cities can learn from Stockholm's parking approaches.

Scroll down to read a summary.  Or listen with the player below..

Find out how to subscribe to the audio podcast.

Reminder: Reinventing Parking is the official podcast of the Parking Reform Network.

Daniel and I covered a wide range of topics, including:

More from our discussion is below. For even more detail, have a listen to the episode!

As mentioned above, my guest this time to talk about Stockholm parking was Daniel Firth. 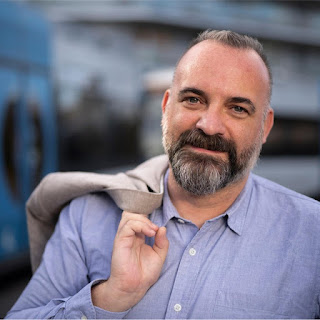 He is an Englishman in Stockholm, having arrived there in 2007 to work as a transport planner for the city. Parking was a large part of the job, although Daniel is best known for his work on congestion pricing. His work on that in London helped land him a job with Stockholm which, in 2007, was setting up its own congestion pricing system. In 2017, Daniel moved to Vancouver for a time to lead a major study into road pricing there. He is now back in Stockholm and his current role is Programme Director, Transport and Urban Planning, C40 Cities, a network of mayors of nearly 100 leading cities collaborating to deliver urgent action on the climate crisis.

Summary of Key Points from our Discussion

Sacrilege!
But he placated me by making a strong case that parking is important, which is why he works on it.
Getting parking right enables much that people value in their lives and about their city.
Parking policy is a powerful set of tools and also flexible. It can be tweaked to deal with unpredictable changes.

This was the issue that prompted this episode.

Stockholm's residential on-street parking fees may be the highest in the world.

In the most expensive zones, residential permit parking costs 1,100 Swedish Kroners per month which is about US$120. That comes to about US$1,440 per year.

Daniel clarified that the parking "permit" itself is free of charge. Anybody who has a car registered at an address where there is paid parking can apply for a parking permit. The permit enables the resident to then buy a residents parking ticket for any month it is needed.

That ticket comes at quite a high cost but the city likes to emphasize that this is a steep discount compared with what everyone else is paying.

Please don't think this was easy to achieve. Daniel mentioned having metaphorical scars from his time dealing with this as a City of Stockholm transport planner.

Most anger arose when pricing was extended to new areas rather than when the prices rose.

Nevertheless, the extensions stood and the high prices remain.

Daniel pointed to some historical background as one explanation. Parking legislation in the 1940s and 50s framed on-street residential parking as an exceptional measure. This established the idea that residential on-street parking was a privilege not a right.

The city's framing of residential permit-based parking as a steep discount for residents may also be important.

In 2014 or so, Daniel and his team at the City of Stockholm were keen to try a demand-based approach to setting on-street visitor parking prices (raise prices if the parking is too full, lower them if it is too empty), as San Francisco, Seattle, Calgary, and various other cities do.

Unfortunately, this turned out to be inconsistent with the relevant enabling legislation.

Nevertheless, the existing system of price zones is relatively efficient, even if prices cannot be adjusted very accurately in time and space.

Surprise! Stockholm can require parking but not require it stay as parking!

An unusual feature of Stockholm parking requirements, mentioned by Daniel, is that the municipality cannot make sure that parking that is built under the parking mandates remains used for parking.

Building owners that do not see enough value or return from the parking space within the building (usually underground in Stockholm), will often used for other purposes or completely converted to other uses besides parking.

This is unusual. Most cities with parking mandates also specify that parking space built under those mandates cannot be converted or used for other purposes without permission.

Daniel mentioned that there is currently some anxiety about this in Stockholm, since the invasion of Ukraine has reignited interest in the need for bomb shelters, which is a role that underground parking can play.

This was possible because, as mentioned above, the city cannot ensure that mandated parking space with buildings remain as parking spaces into the future.

Even if Stockholm on-street residential parking prices were not exactly cheap by international standards, they were still relatively cheap.

If I understand Daniel's point correctly, this drove down the demand and market price for off-street parking, since residents in dense areas could park affordably in the street rather than lease off-street parking.

As a result, over time many buildings apparently converted their underground parking space to other uses, such as warehousing, retail, bars, restaurants and so on.

Seeing such a trend, many cities would have many cities doubled down and made sure they could enforce the minimum parking requirements rather than doing something about the on-street parking.

But, to its credit, Stockholm didn't do that. It did retain parking mandates. But the focus of effort was generally focused on improving on-street parking management.

All of Stockholm Parkering's board members are elected local politicians.

Stockholm Parkering is also in a special position to drive innovation. For example, it is leading the way in putting charging stations for electric vehicles in its garages. It also led on secure bicycle parking. It is trying to turn some of its garages into mobility hubs.

Stockholm Parkering and its role in payments in lieu of parking

Developers who are unable or unwilling, or it would be very difficult, or very expensive to build parking under each individual building, are able to go to Stockholm Parkering, which can be paid to build public parking nearby.

One public parking garage in a park-once-and-walk neighborhood is more efficient than several small private ones.

Thus, Stockholm Parkering plays a key role in Stockholm's system for payments in lieu of parking (a familiar idea in many cities).

Sometimes Stockholm Parkering may not need to build new parking, if it has spaces available in an already-constructed parking structure.

The history of Stockholm Parking Standards

The first parking minimums were imposed in 1956 after a famous study tour of Swedish architects and planners to the USA.
This essentially imported US parking standards, despite the fact that American car ownership levels were many times higher than Sweden's at that time.

This led to a massive oversupply of parking.
Since 1968, Municipalities have been more able to decide their own parking standards. Many, including Stockholm, gradually reduced the amount of parking mandates with buildings.

In 2015, Stockholm completely revamped its approach to parking standards.
In this approach, there is a general basic range for parking standards (0.3 to 0.6 parking spaces per housing unit). This is based on car ownership in the city.
Location factors, such as centrality and accessibility by public transport, are then used to modify the range that will apply.
The nature of the development also matters, such as whether housing units are small or large. In the case of student apartments, you can have almost no parking.
The green parking aspect involves further reductions if the project will offer mobility services, such as bike-sharing or car-sharing.
This approach is not an inflexible set of parking standards. Nor is it open season for negotiations and ad-hoc results. Daniel described it as enabling structured negotiation between the city planners and developers in a way that is understandable, transparent and defensible.
The new system ended a period in which negotiations had been less transparent, predictable, or consistent.

Parking costs are unbundled for most housing

Most people in Stockholm live in apartments either as , whether rental housing or condos.
In both cases, parking costs are very often a separate cost from the cost of housing itself. In other words, much home-based parking is "unbundled".
Daniel pointed out that this does not necessarily mean there is no cross subsidy for housing going on.
As an example, when Daniel had a car previously, his household in an inner ring area, paid 1,100 Kroner per month for parking under a neighboring building.
The costs vary from place to place and from building to building, with buildings from the 1960s and 70s having over-abundant parking and low prices. Buildings built since about 2000s have much higher prices.
Leasing parking under a different building from the one you live in is apparently common and entirely legal. The insurance costs are a little higher than parking under your own building, if it has parking.

Parking was relatively neglected (even though Stockholm has done well)

Even in Stockholm, parking has been a relatively neglected issue. Of course, Stockholm is not alone in this!
Daniel mentioned that when he arrived in Stockholm, the pile of studies looking into congestion pricing was huge but the pile of parking reports was tiny.
In fact, the arrival of congestion pricing in 2007 was a stimulus to further parking reform.
In London, when congestion pricing was introduced, Transport for London could truthfully say that they had tried just about everything else, including powerful parking policy tools, to ease traffic.
Stockholm could not say the same.

A housing crisis, as elsewhere, has been a key motivator for getting the parking permit system and the parking standards systems right

Stockholm and its metropolitan area have been growing rapidly and, like so many other cities around the world, it is facing a severe housing crisis.
In several countries, housing affordability has fuelled campaigning against parking mandates. Stockholm has been a little different.
Although Stockholm has not abolished parking mandates, its 2015 reforms to the parking standards should at least help.
But, in Stockholm, housing has also motivated the expansion of paid parking and paid on-street residential parking to the outer areas of the city.
The city understands that this is crucial to making sure the new housing that is needed does not cause parking problems and undermine public support for such housing.

A number of park-and-ride sites were added close to the inner city around about the time congestion pricing was introduced. This was intended to offer alternatives to paying the congestion charges.
However, an investigation found was that many users of this parking were NOT riding. The lots were providing parking for people who live or work locally
And among those who did park and ride, most had driven past four or five other park-and-ride lots further out to get to the inner-area park and rides.
The study that there were better uses for the land occupied by many of these inner park-and-ride facilities.

Daniel also shared the story of how he came to call Stockholm home.

Listen to the episode to hear more.